Dedicated not only to the fallen, but to firefighters worldwide 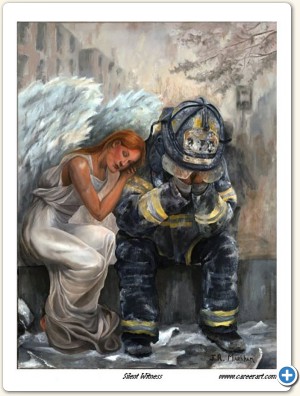 Why "Silent Witness" was commissioned

CareerArt's president, Graham Busch, was raised on a farm near Kerrobert, Saskatchewan, a town of only 1200 people. Being raised in this close knit community taught Graham the importance of helping and volunteering for others. Graham was an avid volunteer firefighter for five years as well as a volunteer with the ambulance service acquiring his Emergency Medical Certificate in 1992. In 1998 Graham moved to Swift Current, Saskatchewan to be an auxiliary firefighter with the Swift Current Fire Department. While there he also worked full time as an EMT with the Swift Current Ambulance. In 1999 Graham fulfilled his lifetime ambition when he became a full time firefighter with the city of Calgary.

Graham saw first hand the events unfold of 9/11 on TV. Like different points in history, people can remember exactly what they were doing at specific moments of time. For a lot of people like Graham, September 11th started out as just a typical ordinary day, then someone yelled out a plane had hit the world trade center. Graham saw the rest of the events unfold when the first tower collapsed. Few words can adequately explain how people felt that day. Disbelief, anger, fear, anguish, empathy and compassion are a few.

Graham decided a short time later to start a project to not only help the surviving family members of tragedies such as 9/11, but for the countless other firefighters who give their lives in the line of duty.

As a result, a portion of all proceeds will be donated to charities who's purpose is to help support the widows and orphans of brother firefighters recover from such a tragic loss. God Bless Them All!!